For a long time, to be precise since Adobe Photoshop 5.0 (1997), I’m using the quite perfect graphics tools from Adobe to create my demoscene art as well as customer projects. A year ago, I discovered the Affinity product line from Serif and started to track their ongoing development. 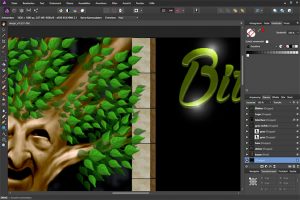 After a extended beta phase of Affinity Photo and Affinity Designer, I decided to give this new Adobe competitor a shot. I heavily worked with these two Serif products to get a feeling if they could fully replace Adobe Photoshop and Adobe Illustrator concerning my needs.

I realized that the workflow in the Serif products is different to the Adobe products, but from the beginning I liked the new concepts and when the Windows versions got released, I fully switched to the Serif products.

If you want to switch over too, you should keep in mind:

There are still a lot of features missing in the Affinity product line compared to the Adobe competitors and you can often run into problems creating stuff like you were used to do, but in most cases there are workarounds and the user support through the FAQ, the tutorial section and the other Affinity users is really good.

The two programs from Serif run very stable and the file support for reading my current Photoshop and Illustrator files is quite good, although you have to accept drawbacks when it comes to editable texts and you could also loose some things that depend on photoshop or illustrator features that aren’t supported yet.

I haven’t run into major problems until now and I begin to feel “at home” in my new tools already.

The roadmap for upcoming features is long and seems ambitious in some fields, but I have to admit, that Serif delivered really well with the first versions.

I will keep you updated!

This website uses cookies to improve your experience while you navigate through the website. Out of these, the cookies that are categorized as necessary are stored on your browser as they are essential for the working of basic functionalities of the website. We also use third-party cookies that help us analyze and understand how you use this website. These cookies will be stored in your browser only with your consent. You also have the option to opt-out of these cookies. But opting out of some of these cookies may affect your browsing experience.
Necessary Always Enabled
Necessary cookies are absolutely essential for the website to function properly. This category only includes cookies that ensures basic functionalities and security features of the website. These cookies do not store any personal information.
Non-necessary
Any cookies that may not be particularly necessary for the website to function and is used specifically to collect user personal data via analytics, ads, other embedded contents are termed as non-necessary cookies. It is mandatory to procure user consent prior to running these cookies on your website.
SAVE & ACCEPT